Back to home page           Recording at the Underground Recording Studio 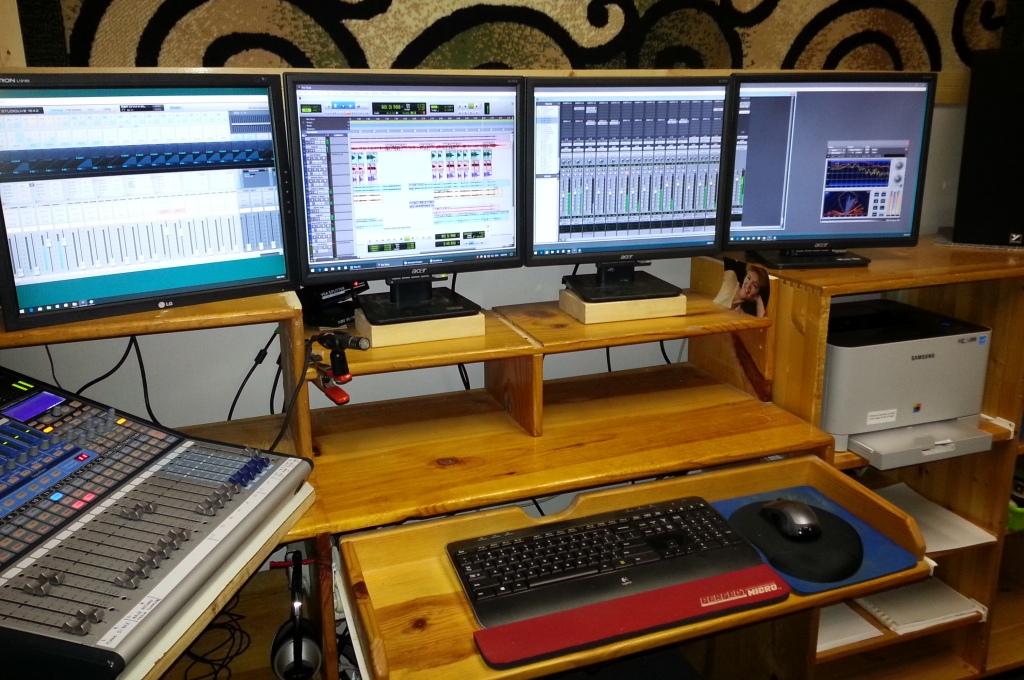 Due to requests from fellow musicians, I have decided to open up my private studio (originally the Back Yard Studio, now called the Underground Recording Studio) to recording, anything from demos to full albums. I can record to the depth you desire - from simple demos to fully mastered albums ready to be pressed to CD or for digital distribution. Talk to me to figure out how we can make your project work.

As of 2021, I can also do video livestreaming, recording and editing of live shows or music videos. Let me know what you have in mind and we will see if it fits.

We are located on the north edge of Millwoods in Edmonton, easy to get to and free parking.

Are you tired of spending $15,000 or more to record your independent album? I hear that story a lot. We can do better.

Winter 2021: We are recording a compilation album for the Uptown Folk Club in Edmonton. 20 artists each submitting 1 song for the CD. Loads of fun!!

Feb 2020:  I have revamped my mixer setup to use a lovely Mackie 16 channel analog mixer with FMR compressors. Dead quiet, beautiful sound from the Class A analog preamps, along with outboard processing. It gives me a reliable recording capability and a simple control setup. Yay!

I have 4 sets of new studio headphones. These are Sony MDR-7506, the studio headphone standard around the world for the past 25 years. They inserted effortlessly into my setup and sound great.

You can hear what my recordings sound like - by playing the music on this website. Both my albums were recorded all or partly at prior iterations of my studio. Also check out Ronie George's recent music video , for which we recorded the vocal, here: https://www.youtube.com/watch?v=ypHLnZeaXRk

I have more than 25 years experience recording sound, sound for video, TV and movies, live sound, and computerized editing of both video and sound. I was the location recordist for the TV children's series "Take Off" which won awards for sound in the 1990s (but the studio got the awards, not me). I have the tools and the experience to get a great sound for your project at a price you can afford. Call me.

Besides performing, I also have done live sound for a wide range of bands for many years including John Lee Hooker, Leo Kottke, James Cotten, the Dead Kennedys and Ian Tyson, west coast world-beat bands such as Alpha Yaya Diallo and Ngoma, and numerous outdoor and indoor music festivals. I also worked in the film and video production industry for several years using one of the first broadcast-quality computerized digital video production stations on the west coast.

I have a comfortable 350 square-foot studio (including a separate recording room) with sound treatment that has a really nice sound to it. We are located near the Millwoods golf course in Edmonton.

Style of music - I can work with almost any style of project from reggae to roots, so let's discuss what you want to do. I have recorded everything from acoustic folk, blues, jazz, African and Latin, to hip-hop, rap and reggae.

Rate - Generally, $28 per hour (don't worry, I won't charge you for time spent gabbing like some studios do). Talk to me, we can work something out.

October 2017 - Hey, I have a large (180 square foot) recording room for recording vocals or instruments! Here is a partial picture of the room in the new studio:

2019 and beyond: too many artists to list individually... the studio is in regular use by a variety of artists ranging from hip-hop to traditional folk instrumentalists to voiceovers for video and TV. We are making some awesome music and I am enjoying meeting new artists each week. It feels great to offer a reasonable cost space for such a diverse community.

March 2018:  the Big Sky Gliders are back to work on their next project.

Feb. - March 2018 - Nelson is in, recording some of his reggae tunes to send back home to Jamaica.

January - March 2018: Lamar and Dior, who are part of the "401 Music" collective, are working on a hip-hop project in the studio. Lots of fun and some interesting beats coming out of it.

Christmas 2013 - I am so excited!  I got an Advanced Audio CM87se microphone for Christmas! This awesome mic will be a great addition that I plan to use on all the acoustic stuff, from vocals to acoustic instruments. Yay!

spring/summer/fall 2013 - Jamie Price is coming in to do some tunes for a new CD. Update November 2013 - The CD is released under the stage name "Must Be Tuesday" and I have listened to it. Very nice tunes!

March 2013 - Rebecca Lappa recorded a few tunes with her piano and voice.

spring 2013 - Brian Parsons is back to record his next song for his latest  grandchild.

January 2013 - ? - Jesse Harlton is in the studio recording some of his original tunes, just for fun to see what they sound like ...

December 2011 to May 2012- The Big Sky Gliders are in my studio now recording an album, (update: the album was released in November 2012) - check out their material at their Bandcamp site here:

spring 2012 - Brian Parsons recorded 2 songs that he wrote for his grandchildren. Another grandchild is coming soon and we will do a song for that one in spring 2013.

February 2018 - Once again Brian and I mixed the live sound for the Edmonton Winterfest put on by the Uptown Folk Club (the 7th time we have done the sound for this festival together!). This was the 10th year of the festival, which is always filled with great music and people. This year we enjoyed working with veteran performers Valdy, Skip Ewing, Gary Fjellgaard, Wendell Ferguson, Alfie and Byron Myhre, Caitlin Hanford and Roger James, as well as rising stars Rebecca Lappa and Alee. We again had an excellent stage crew that made life easier. The festival was very well attended and a lovely weekend was had by all.

February 2014: The Winterfest sound was again a lovely experience, again with Brian Parsons and a veteran stage crew. This year we had terrific performers and I didn't have any surgery scheduled!

February 15 - 16, 2013 - Once again I did the main stage live sound for the Edmonton Winterfest, again with Brian Parsons. This was especially satisfying because the first day of the festival was also the day of my long-awaited surgery to repair my broken ankle. Fortunately my surgery went well and I was able to participate in the Saturday fun, as well as play a couple of songs on stage. The sound was again lovely to hear and our stage crew was terrific, since I could only do the mixing since I was hobbling around on crutches the whole time. Lots of fun and I am looking forward to next year already!

February 17 - 19, 2012 - I did the Edmonton Uptown Winterfest sound again this year, again with Brian Parsons. We had some lovely performers, including Cindy Church, Wendell Ferguson, Roger James, Elena Yeung, Shane Chisolm, the Command Sisters, and many others (and I got to play a feature set as well. We again received many compliments on the sound quality, and yet again had a lot of fun.

February 18 - 20, 2011 - I did the Edmonton Uptown Winterfest sound again this year, again with Brian Parsons. We had some lovely performers, including Colleen Rae, Brett Kissel, Back Porch Swing, Paul Hann, and many others. We received many compliments on the sound quality again this year, and once again had a lot of fun.

February 12 - 14, 2010 - I did the sound mixing for the main stage at this year's Winterfest. It went well and we were able to give all the performers the best sound to showcase their talents. It was a lot of fun for me, as I used to do sound at festivals and clubs back in the 80's and 90's but haven't had much chance to do live sound since I moved to Edmonton in 1999.