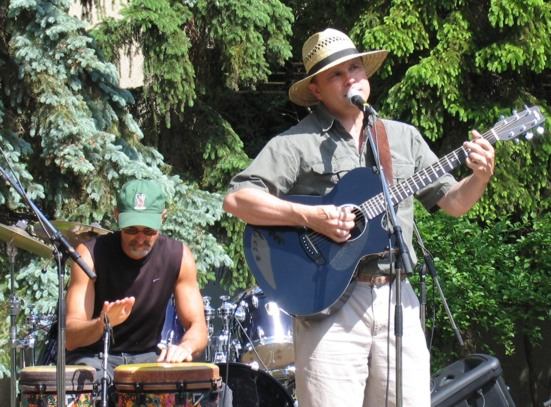 For 25 years Rick has been observing people and writing about them, from the depths of despair to the heights of joy, always with a positive and wry take on the foibles of humanity being humanity. Writing in a variety of acoustic styles including folk, country, Latin, blues and African, he brings the large and small issues of life to life.

“It was our pleasure to have you play for us. You sounded great.” Darla Sawatsky, Bookings Director - Tongue On the Post festival and Medicine Hat Folk Music Club

"I have just received your CD "Evolution", through Radiodirectx. Glad it did as we really love your blend of roots, swing, country and folk. All married into a gumbo of just good down home fun, no pretensions just good time music. Gotta love the feel and the marriage of styles, this CD does it for us. The choice of material backed up with a band that swings rather than play sound like computers adds to every element of this CD. ... We love this CD so as to making a choice where to allocate to was extremely easy." Peter Merrett - PBS 106.7FM, Melbourne Australia

"Evolution"  is at once the title of the first solo album by singer/songwriter Rick Garvin and an apt description of the changes in his sound as he has moved from region to region and band to band. In 2008, Garvin's music shifts easily - and ear-pleasingly- from folk to swing to reggae to ska. A highly recommended debut.” - Mark Rheaume - CBC Radio 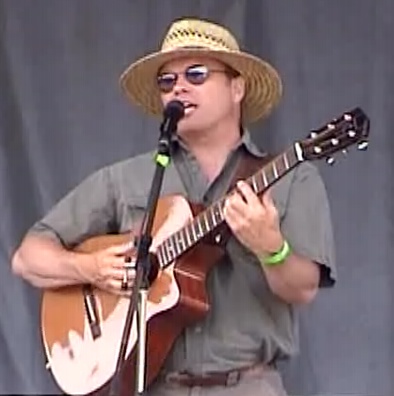 Heavily influenced by the Canadian folk music scene in the seventies, Rick was stirred by the reggae wave in the early seventies with Jimmy Cliff, Peter Tosh, and of course Bob Marley, and also by the new country/swing/bluegrass movements of the times. Those styles have continued on to this day to influence his music, which can perhaps be described as acoustic roots/swing-grass music.

Rick has played as a solo artist all over Canada since time immemorial, and also in many groups in a wide variety of styles including blues, folk, country, Latin, and African. Among the better known bands were the Real Live Dance Band, Stone Whistle, and Jambo Salama.

Real Live Dance Band in the early 1980s was a popular rock/blues/commercial pop band on the west coast. It was here that he first learned traditional Irish tunes on mandolin.

Stone Whistle was a Celtic-rock fusion band that played halls and festivals in the mid-nineties on the Canadian west coast. Stone Whistle played all original and Celtic traditional tunes. Garvin contributed vocals, guitar and mandolin to this project. The band released a CD called "Salamanders" in 1995.

You can listen to a couple of Stone Whistle tunes on mp3.com . Click

here to follow the link to hear a couple of these old tunes.

We recently found a video clip by the Heartsong III sailors about Malaysian elephants that uses another song from the Salamanders album. Click

Jambo Salama was an African/Latin project fronted by Prince Nallo of Sierra Leone and based in Victoria BC, that played hall dances, festivals, and occasional club dates in the late nineties. The band was known for its all-original music and for its high spirited gigs and loyal fans.

There is an Afro/Latin version of Rick's reggae song "Even So" as performed live at a Jambo Salama dance hall gig on January 30, 1998 in Victoria. Clyde Dixon sings this tune, with Rick on bass. A poor quality recording made by a video camera, but fun anyway. Click

Besides performing, Garvin also did live sound for a wide range of bands for many years in the eighties and nineties, including John Lee Hooker, Leo Kottke, James Cotton, the Dead Kennedys and Ian Tyson, west coast world-beat bands such as Alpha Yaya Diallo and Ngoma, and numerous outdoor festivals.  He also worked in the film 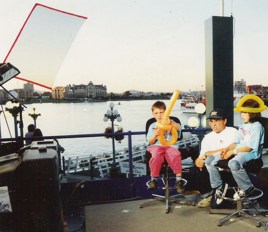 and video production industry for several years in the nineties. (here is a picture of Rick and two of his children on the CBC Newsworld set at the 1994 Commonwealth Games). He then put it all aside to focus on earning a living, and now can finally return to making music.

Rick Garvin - "The Family of Man" - released 2009 - the latest solo album features 14 new acoustic songs about life and love, with wonderful backup musicians led by Wendell Ferguson, 6-time CCMA guitar player of the year. From beginning to end, a thoughtful and sometimes funny look at ourselves and our place in the world.

Rick Garvin - "Evolution" - recorded in 2001 and 2007 - The first solo album was finally and officially released in 2007. The album is the result of requests from relatives and friends for a collection of favourite songs. Although some of the songs date back years (or decades), this is the first time they have been all gathered together. The album was recorded mostly in the Back Yard digital studio from September 2000 to February 2001, and the finishing touches were done in 2007. Courtney Garvin contributed the front panel artwork for the album, and Graeme Garvin created the back panel artwork. Two songs, "Round Round" and "Little Piggies", were added from the earlier Stone Whistle CD rather than re-recording them.

Stone Whistle - "Salamanders" - released 1995 - Stone Whistle was a Celtic rock fusion band based in Victoria BC, which became very popular on the dance hall circuit around Vancouver Island and the Gulf Islands in the mid 90's. Their debut (and only) CD released in 1995, "Salamanders", received critical approval and airplay on local college and public radio, and the CBC nationally and in Poland. I played guitar and mandolin in Stone Whistle, and also contributed vocals and some songs.